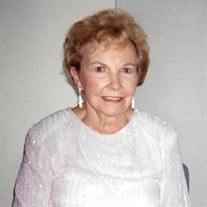 Anna Vignovic, 94 of Greenville, went home to be with the Lord on November 28, 2020. She was a resident of The Woodlands at Furman in Greenville. Anna was born on October 7, 1926 to Anna and Dmitry Podgorny in Homestead, Pennsylvania. She was the youngest of three siblings. Anna graduated with honors from Fifth Avenue High School in Pittsburgh, Pennsylvania at the age of 16. Anna married Walter Vuchkovich on January 1, 1943 in a civil ceremony prior to Walter’s reporting to military duty for service in the Army in WW II. The war separated the couple for two years following his tour of duty, keeping in touch only by written correspondence while serving time overseas. Upon Walt’s return they settled into married life in Pittsburgh and started a family. They were blessed with three daughters and a long and happy marriage until Walt’s death in 1988. In 1991, Anna married widower, Peter Vignovic. Pete and Anna were married in Pittsburgh and lived in Bethel Park, Pennsylvania. They both enjoyed each other’s company and traveled extensively until Pete’s health declined which resulted in his death in 2007. Anna and Pete were active members of the Holy Trinity Serbian Orthodox Cathedral in Whitehall, Pennsylvania. During her life, Anna worked in several business schools and had a children’s clothing store when her girls were young. She also worked in sales and enjoyed being around people immensely. Over her lifetime she enjoyed travel to many locations in the world and she and Pete were avid cruisers. Anna enjoyed reading, and was an artisan knitter and crochet master. Over her lifetime she made at least 100 afghans, blankets, hats, sweaters, etc. and gave them to friends and family as a symbol of her love. At age 88, she decided to relocate from Pittsburgh to Greenville, South Carolina to live close to her youngest daughter. Anna lived at Cascades in Greenville for six years and thoroughly enjoyed the community. She made numerous friends and was involved in many of the activities that were offered within the retirement community. Anna loved her friends that she made throughout her lifetime and kept in touch with as many as she was able. She was a gentle, but strong woman with a positive outlook on life and possessed a great sense of humor, always looking at life with a sense of optimism. Anna is survived by her daughters, Ellene and husband William Lucas, Tamera and husband John Pirraglia. Step-children, Mark Vignovic and wife Debbie, John Vignovic and wife Joyce, Myra Vignovic and husband Jon, son-in-law Alan Nitchman. Grandchildren Tim Raleigh, Adam Raleigh and wife Cara, Nicole Herzog and husband Derek, Tara Johannesen and husband John, Ali Crumb and husband Nathan, Emily Knippa and husband Michael. Step-grandchildren, David Vignovic, Chelsea Kluczkowski and husband TJ, Logan Vignovic, Drew Blasius and Emma Blasius. Anna is also survived by twelve great-grandchildren and several nieces, nephews. Anna is predeceased by spouse, Walter Vuchkovich (1988), spouse, Peter Vignovic (2007), daughter, Alexis Nitchman (2015) and grandson John Pirraglia (2017) and siblings Michael Podgorny and Helen Skoda. A graveside service, officiated by Rev. Jonathan Tompkins, will be held on Tuesday, December 1, at 3:00 p.m.at Mountain View Memorial Park in Travelers Rest, SC. The family would like to thank the Skilled Nursing staff at The Woodlands at Furman and Interim Hospice for taking care and making her last days as comfortable as possible. In lieu of flowers donations may be made to a charity of your choice in memory of Anna Vignovic.

Anna Vignovic, 94 of Greenville, went home to be with the Lord on November 28, 2020. She was a resident of The Woodlands at Furman in Greenville. Anna was born on October 7, 1926 to Anna and Dmitry Podgorny in Homestead, Pennsylvania. She... View Obituary & Service Information

The family of Anna Vignovic created this Life Tributes page to make it easy to share your memories.

Anna Vignovic, 94 of Greenville, went home to be with the Lord...

Send flowers to the Vignovic family.