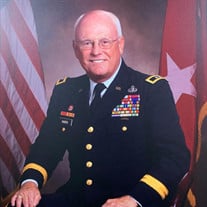 Arthur Hamilton Baiden III MG AUS (Ret.) died peacefully at home on March 8, 2021. Born in Laurens, South Carolina, he was the son of Clemiegene Teague and Arthur Hamilton Baiden Jr. A 1958 graduate of Myrtle Beach High School, Art followed in his father’s footsteps to attend the Citadel. As a cadet, he was second honor graduate for the Class of 1962, the first recipient of the LeTellier Award, a member of the Summerall Guards, a member of The Round Table and Who's Who in American Universities and Colleges. He was also a member of Tau Beta Pi and Phi Beta Phi. In addition, he was a Distinguished Military Graduate. Upon graduation, he was commissioned as a 2nd Lieutenant in the United States Army and assigned as a Combat Engineer officer to the 82nd Airborne Division. A Ranger and master parachutist, Art held numerous command assignments on active duty and in the Army Reserves in the states and overseas including combat tours in both the Dominican Republic and Vietnam. His awards and decorations include the Distinguished Service Medal, Legion of Merit, Bronze Star and Purple Heart. In 1994 he received the Order of The Palmetto, South Carolina's highest honor, for his service as Commanding General of the 120th Army Reserve Command and in support of Operation Desert Storm. He subsequently served as the Deputy Commanding General of the U.S. Army Reserve Command and the first Commanding General of the U.S. Army Reserve Readiness Command. He also served as a member of the Army Reserve Forces Policy Committee at the Pentagon in Washington. He retired from military service in 1997 with the rank of Major General after 35 years of service. In addition to his Bachelor of Science degree in Civil Engineering from The Citadel, Art received his Master's Degree in Civil Engineering from North Carolina State University, and in 2009 he was awarded an honorary Doctorate of Military Science from The Citadel. He is also a graduate of the US Army War College. Art enjoyed a civilian career as well as his military service. After 32 years, he retired in 2005 as President and CEO of Potter Shackelford Construction Company in Greenville. He was committed to com-munity service as well and served as President of the Speech, Hearing and Learning Center; President of the Wade Hampton Sertoma Club; and Chairman of the Board of Carolinas AGC, the largest construction trades organization in the Carolinas. He was former Board Chair and Board Member Emeritus for Habitat for Humanity of Greenville County, was a longtime member of the Poinsett Club, and held a lifelong love and respect for he alma mater, contributing to the college in several capacities. He has served the college as Chairman of the Board of Visitors, Vice Chairman of the Board and as President of The Citadel Alumni Association. Throughout his lifetime, Art was an active member of two church congregations in the Greenville area. As a 34-year member of Taylors First Baptist, he was a member of the choir and led senior high school youth groups. For the past 12 years, Art has been an active member of John Knox Presbyterian and has served as an elder, member of the Property and Operations Committee, and sang in both the Chalice and Chancel choirs. Most recently he was President Elect of Kiwanis of Greenville. Art is survived by his daughter Annalynn Baiden Barnett, his son A. Hamilton Baiden IV (Dawn), his sisters Tina Baiden Harper and Billie Baiden Hudson (Phillip). He cherished his three “grandgirls”: Skylar Serge, Mia Serge, and Lili Baiden as well as several nieces and nephews. In addition to his parents, he was predeceased by his wife of 54 years Jean Parsons Baiden, son-in-law, James Earle Barnett Jr., brother-in-law John C. Harper, and nephew J. Christopher Harper. A Memorial Service will be held on August 27, 2021 at 3 PM at John Knox Presbyterian Church in Greenville, SC with Full Military Honors. Memorials may be made in his name to the Cancer Survivors Park Alliance; P. O. Box 9428; Greenville, SC; 29604 or to the Art Baiden, '62, and Jean Baiden Scholarship at The Citadel Foundation, 171 Moultrie Street, Charleston, SC 29409 or online at foundation.citadel.edu. The Howze Mortuary, Travelers Rest, is in charge of arrangements. (864) 834-8051

The family of Arthur H. Baiden, III MG AUS (RET) created this Life Tributes page to make it easy to share your memories.