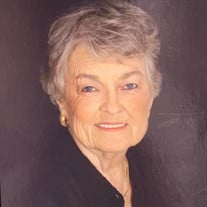 Bonnie Lou Richardson Smart, 85, of Greenville, wife of the late James H. “Jim” Smart, passed away Saturday, January 22, 2022, at Greenville Memorial Hospital. Born in Randolph, TX, she was a daughter of the late William Martin Leslie and Thelma Lee Barnett Richardson. She was retired from the Greenville County School System as an administrative assistant and was a member of First Baptist Church of Greenville. Bonnie was known as a warm, caring, outgoing, and generous person who loved to spend time in conversation with fellow church members, Starsdale Circle and Rolling Green Village neighbors, and her local family members and many friends. She felt especially close to her extended Texas family in the Dallas area, and she also kept in touch with good friends from her days at Carrollton High School. At First Baptist, for a period of ten years, Bonnie co-taught a Sunday School class for young adults with her husband Jim. She enjoyed keeping up with the class members in later years, seeing many of them marry and have children, and eventually grandchildren, of their own. Education was one of Bonnie’s highest values. She completed her BA degree at Judson College in Marion, Alabama; trained as an elementary school teacher; worked for several area schools, including the Shriner’s Hospital School and Arrington Elementary; and was actively involved in the lives of her late husband’s students at Furman University. She wholeheartedly supported and celebrated her granddaughter’s educational achievements through graduate school. In her later years she became a supporter of Furman’s Cothran Center, whose mission is to help students and others in the community connect their education to a meaningful sense of their life’s purpose. She is survived by her daughter: Susan D’Amato; son: Rusty Smart (C. F. Hawkins); granddaughter: Alexis D’Amato; and brother: Robert Richardson (Ann). There will be a private family memorial service at a later date. In lieu of flowers memorials may be made to Triune Mercy Center, 222 Rutherford St. Greenville, SC 29609, Furman University Cothran Center for Vocational Reflection, 3300 Poinsett Hwy. Greenville, SC 29613, or the charity of one’s choice.

The family of Bonnie Lou Smart created this Life Tributes page to make it easy to share your memories.

Bonnie Lou Richardson Smart, 85, of Greenville, wife of the late...

Send flowers to the Smart family.