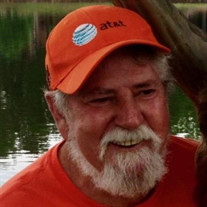 Calvin Edward Hickey, 73, of Travelers Rest, SC husband of Pastor Sue Hickey, went home to be with the Lord Sunday, August 9, 2020. Born in Greenville, he was the son of the late James Hickey and Emma Allen. He is survived by his wife Pastor Sue Hickey, his children Alicia Waynick(Tommy), Julie Hammond(Steven), and Josh Hickey(Dee), his grandchildren Danielle McGowans(Welsey), Lauren Wooten(Brandon), Amber Waynick, Alivia Waynick, Christopher Hammond, Samantha Kelly(Dalton), Jacob Hammond, Trevor Hickey, Abigail Hickey, Whitt Hickey, Nathan Hickey, his graphed in grandson Bentley Sams, and his great-grandchild Sophie McGowans. Calvin is a member of New Life Foundation Church, where most call him Papa Calvin. He was best known for the meals he cooked, the little Debbie cakes and coffee he shared before services. Most of all, for all the fruits and vegetables he gave away after every service. Calvin loved to coon hunt, and was a member of the Greenville County Coon Club. The saying “they don’t make them like that anymore”, best describes Calvin. At age 13, he passed himself off as an adult and became an iron worker in Chicago. He continued working iron construction in Greenville for Flour Daniel, even helping to build the BB&T Building in downtown Greenville along with other structures and buildings around the area. Papa Calvin is best known for his cooking and farming. Many of his grandchildren’s favorite memories were made in the field with him, feeling fresh tilled ground under their bare feet, rolling watermelons, and picking corn. His field is where they learned to drive, hunt deer, and shoot a gun. He gave every grandchild their first puppy and their first gun. There are so many people in the Travelers Rest area who have bought or been given Papa Calvin’s vegetables. We have been told multiple stories of people who came home to find a bag of his vegetables on their door. He was a firm believer that good food could heal anyone. Some of his most popular dishes were his “healing” chicken and dumplings and world’s famous dressing. He was an avid woodworker building grandfather clocks, dry sinks, and gun cabinets. Calvin showed love to people through the work of his hands, that was his ministry. He will be greatly missed. Funeral services will be Friday, August 28, 2020 at his garden at 1601 Roe Ford Rd., Greenville, SC 29617. Burial will take place at Mountain View Memorial Park. Memorials may be made to New Life Foundation Church, 10 Rochester Road, Travelers Rest, SC 29690.

Calvin Edward Hickey, 73, of Travelers Rest, SC husband of Pastor Sue Hickey, went home to be with the Lord Sunday, August 9, 2020. Born in Greenville, he was the son of the late James Hickey and Emma Allen. He is survived by his wife Pastor... View Obituary & Service Information

The family of Calvin Hickey created this Life Tributes page to make it easy to share your memories.

Send flowers to the Hickey family.