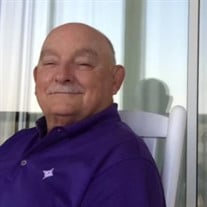 Charles &#8220;Charlie&#8221; Allen Anderson, 76, of Marietta, passed away Saturday, January 9, 2021 at Greenville Memorial Hospital. Born in Greenville County, he was a son of the late Ben and Ann McDowell Landover. He was retired from Hi-Tech... View Obituary & Service Information

The family of Charlie Anderson created this Life Tributes page to make it easy to share your memories.

Send flowers to the Anderson family.