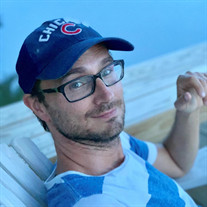 David Lee Nelson II, 42, of Greenville passed away on September 24, 2020, from complications from cancer. He was born in Charleston, SC on July 29, 1978, the first child of David Lee Nelson (“Lee”) and Ann Troublefield Nelson. David is survived by his wife Jaimie Malphrus – they married in March at a ceremony at Bon Secours St. Francis Downtown. He is also survived by his parents; three sisters, Anneclaire Nelson, Valerie Strawhorn (Michael), and Rachel Troublefield Nelson; his nephew Patrick Strawhorn; and many extended family and friends. At the time of his death, David was a theatre instructor at the Fine Arts Center of Greenville and adjunct professor of theatre at Furman University. He received his B.A. in theatre from the College of Charleston (where he was later a visiting faculty member) and his M.F.A. from the Alabama Shakespeare Festival (where he would return as a writer and performer). A member of the Screen Actors Guild and Actors’ Equity Association, David was an award-winning playwright and standup comedian whose solo plays toured the country and to Edinburgh. His play “Stages” and book “Hope in the Time of Chemo” chronicled his diagnosis at age 38 with stage four colon cancer and his journey through treatment alongside his family and beloved wife Jaimie. These works, as well as his blog www.davidleenelson.com, became an inspiration to many and will remain a part of his creative legacy. A visitation will be held on Friday, October 2 at from 12:30 to 1:50pm, with a ceremony immediately following at 2:00pm, at the Howze Mortuary, 6714 State Park Rd., Travelers Rest SC. Attendees are asked to wear masks and keep socially distant. The 2:00pm ceremony will also be streamed for online attendance. A celebration of David’s life and art is being planned for a later date. The family would like to thank the excellent doctors and nurses at Emory Hospital and Bon Secours St. Francis for their caring support. In lieu of flowers, memorials may be made via www.gofundme.com/davidleenelson which will go towards outstanding medical bills and funeral costs as well as two organizations close to David's heart: Camp Mak-a-Dream in Montana and Riverside Theatre in Iowa City.

The family of David Lee Nelson created this Life Tributes page to make it easy to share your memories.

David Lee Nelson II, 42, of Greenville passed away on September...

Send flowers to the Nelson family.