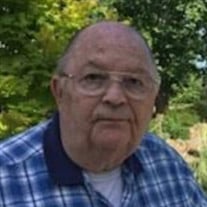 Absent from the body, present with the Lord. On Wednesday, March 2, 2022, David Marshall Price entered into the loving arms of our Lord Jesus Christ whom he so faithfully served. David was born March 4, 1940 in Newport News, VA, to Clarence Marshall and Pearl Owens Price. He realized at a young age that Christ Jesus came to earth to take the punishment for our wrongdoings and while sitting on top of a gravestone in the cemetery of Denbigh Baptist Church he prayed and accepted God’s free gift of salvation. He graduated from Bob Jones University in 1965, and with his wife, Marilyn, began his lifetime of service to God. He began as a youth pastor of Dandy Baptist Church in the community of Dandy, VA. While serving at Dandy he worked at the Newport News Shipyard and Dry Dock on nuclear submarines. From there he became the first missionary sent from Servicemen For Christ (now Armed Forces Baptist Missions), and the family moved to Petersburg, VA, where he ministered to the service personnel at Fort Lee. The family moved back to Newport News where he was then the pastor at Dandy Baptist Church, and in 1972 he accepted the pastorate at York Baptist Temple in Grafton, VA. In 1977, God called him to Landmark Baptist Church and Christian School in Easley, SC where he spent the next 25 years. His great passion was for young people and missions. Throughout his years of ministry, their home was always welcoming to missionaries and many close friendships were made with missionaries from around the world. He was the most amazing son, brother, husband, father, grandfather, and great-grandfather and uncle. He cherished all his family - aunts, uncles, and cousins- and was in return, treasured by all his family. He will forever be in our hearts through the life lessons he taught us and the countless memories we made together. Although we already will miss him dearly, we trust in the blessed hope of the promise of God that we will see him again one day. He leaves behind his precious wife of 59 years, Marilyn; his son, Mark (Sandy) of Easley; daughters, Sherri of Liberty, and Connie Siver (Pernell), of Juneau, AK; grandchildren who were the apples of his eyes: David Graham Price, Annagrace Patterson (Austin), Madison Kate Siver, Craig Myers (Angel), and Jennifer Bearden (Jesse); great-grandchildren who adored their Poppa, Nathaniel David Wayne and Ezekiel Robert Lee Patterson, Natalie Claire and Josie Kate Bearden, and one on the way, Oaklyn Ruth Myers; one brother, Ron Price (Ann) and sister-in-law, Donna Price; and many nieces and nephews. He was predeceased by his parents, a brother, Wayne Price, and an infant sister. Visitation will be Friday, March 4th, at Calvary Baptist Church, 8008 Liberty Highway, Liberty, SC from 6:00 - 7:30 pm. His Homegoing service will be Saturday, March 5th, at Calvary Baptist Church at 2:00 pm. For those unable to attend, the service will be live-streamed through the Howze Mortuary beginning at 1:50 p.m. at www.facebook.com/thehowzemortuary. Memorials may be given to the Mission Fund of Calvary Baptist Church. Online condolences may be expressed to the family at www.thehowzemortuary.com. The Howze Mortuary in Travelers Rest is in charge of the arrangements. (864) 834-8051.

Absent from the body, present with the Lord. On Wednesday, March 2, 2022, David Marshall Price entered into the loving arms of our Lord Jesus Christ whom he so faithfully served. David was born March 4, 1940 in Newport News, VA, to Clarence... View Obituary & Service Information

The family of David M. Price created this Life Tributes page to make it easy to share your memories.

Absent from the body, present with the Lord. On Wednesday, March...

Send flowers to the Price family.