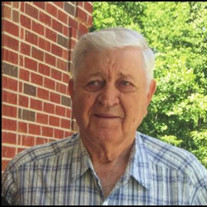 Dennis Willard Hendrix, 80 years young, of 103 Lee Circle, Marietta went to be with his Lord and Savior, Jesus Christ and was reunited with his wife, Geraldine on September 22, 2020. He was surrounded by his two loving daughters, Sue & Joy and a long time devoted cousin, friend and employee, Buddy Reynolds. He succumbed to his eleven year battle with colon cancer at 2:32 pm on Tuesday afternoon. Mr. Hendrix was born and raised in the Peters Creek Community, son of the late Guyson G. Hendrix and Corrie Elizabeth Reid Hendrix. He was a member of Peters Creek Baptist Church. Dennis received his education at Peters Creek School and graduated from Dacusville High School in 1958. Mr. Hendrix then served his country by joining the United States Army until 1965. During that time, Dennis met and married his beautiful bride, Betty Geraldine Capps in 1960. They initially resided in Fort Bragg, NC until 1963. He was then recalled to Active Duty and served during the Cuban Missile Crisis. He returned to the Dacusville community and built the family home where he lived his remaining years. Dennis drove transfer trucks for Cooper Motor Lines for the next several years. In 1972 he started his own company, Hendrix Sand & Gravel, Inc. where he pumped and hauled river sand. He remained self employed until 2018 when he closed the business due to his declining health. Dennis was a lifetime member of The Masons – Ebenezer Lodge #101, AFM, Marietta Lions Club and The Pioneer Power Association. He enjoyed buying, restoring, and pulling antique tractors with his son-in-law, Phil and grandson, Zeb. He loved tractors of all kinds, but Olivers was his favorite brand. Dennis and Geraldine were blessed with daughters: Susan H. Pittman, married to Phil, Joyce M. Hendrix and B. Ann Wyatt, married to Ricky. They were blessed with 3 grandchildren: Zebulun Lee Pittman, wife Amanda Whitmire, Caleb Allen Wyatt, wife Ashley and Caitlyn Ann Wyatt. Ada-Kate Lee is PapaD’s sweet pea and first great-granddaughter with an unmet great grandson to arrive in 2021. He has one other great-granddaughter. Dennis is further survived by one cousin, Caroline Trotter, many nieces and nephews, great nieces and great nephews and a sister, Linda Loftis. Dennis was predeceased by many family members including his precious wife of over 50 years, mother, father and grandparents. In addition to these loved ones, he was predeceased by two brothers, Homer Hendrix and Roy Hendrix, one sister and one brother-in-law, LaDema and Tillman Williams. Dennis and his girls, Sue & Joy would like to say a special thank you to Open Arms Hospice and all their staff but especially, Alana Valentine, RN, our nurse, our rock and our friend; to the staff of the Carolina Cancer Center for the excellence in care and support. To Dr. Jeffery Edenfield many thanks for the never ceasing prayers, care and support. Visitation will be at the Howze Mortuary, Thursday evening, September 24, 2020 from 6 until 8 p.m. with funeral service on Friday, September 25, 2020 at 2:00 p.m. at The Howze Mortuary Chapel. Burial will follow at Mountain View Memorial Park. Pallbearers are: Buddy Reynolds, Tommy Stroud, Lance Ledford, Lee Cason, Clint McConnell, Mark Stroud and Robert Hyder. The family will be at the home.

Dennis Willard Hendrix, 80 years young, of 103 Lee Circle, Marietta went to be with his Lord and Savior, Jesus Christ and was reunited with his wife, Geraldine on September 22, 2020. He was surrounded by his two loving daughters, Sue & Joy... View Obituary & Service Information

The family of Dennis Willard Hendrix created this Life Tributes page to make it easy to share your memories.

Send flowers to the Hendrix family.