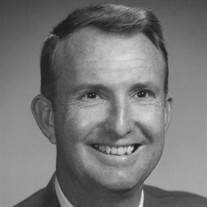 James Robert Crosby, 90, passed away October 4, 2021. Born in Clinton, SC, he was a son of the late K.D. and Ruth Cauble Crosby. Mr. Crosby served in the US Airforce and was a member of Berea First Baptist Church. Jim was an incredible salesman for State Farm Insurance for over thirty years and was a member of the State Farm Insurance Presidents Club since 1984. He served on the Travelers Rest City Council from 1969-1971, and on the advisory board for Southern Bank & Trust and First Union Bank for over twenty years. Jim was a member of the American Trail Rider Association where he enjoyed riding horseback, an Eagle Scout, a 3rd degree Mason with Ebenezer Masonic Lodge, and an 18th degree Scottish Rite. In the later years of his life, he enjoyed bird- watching. There were two brothers, Jim and Ken, who were born 19 months apart. From the start, the oldest (Jim) was larger and stronger than the younger (Ken). However, the younger one went everywhere the oldest went. If he went right, the younger went right… If the oldest went left, the younger went left. As time went by they did almost everything together, there was many games in the neighborhood. In addition there was bicycling, camping, hunting, swimming, dating and others. The older was the constant protector of the younger and they did many things together. Both became Eagle Scouts and participated in local sports. In high schools, they both had jobs and bought cars together made good use of the cars. After high school both joined the USAF. The older brother went to England and the younger went to Japan. This big brother, little brother relationship that developed as they grew thru the years has never changed. Now the older one has departed this life and is with the Lord Jesus. The younger will follow the older when it is time. To coin a phrase “So long Jim” “Thanks for the memories” See you soon!!! Love you, KEN. Surviving are his wife: Frances Carolyn Tate Crosby; one daughter: Terri Bennett (Bob); two brothers: Kenneth Crosby (Catheryn) and Stanley Crosby (Mary Kay); one sister: Peggy Short; three grandchildren; and four great-grandchildren. Mr. Crosby was predeceased by one son: James Michael Crosby. In lieu of flowers, memorials may be made to the Audubon Society of South Carolina 125 Wappoo Creek Dr. Building G, Suite 214, Charleston, SC 29412. Funeral service will be private. The service will be Live-streamed October 14, 2021 beginning at 12:50 p.m. Entombment will be in Woodlawn Memorial Park. Online condolences may be expressed to the family at www.thehowzemortuary.com. The Howze Mortuary in Travelers Rest is in charge of the arrangements. (864) 834-8051.

James Robert Crosby, 90, passed away October 4, 2021. Born in Clinton, SC, he was a son of the late K.D. and Ruth Cauble Crosby. Mr. Crosby served in the US Airforce and was a member of Berea First Baptist Church. Jim was an incredible salesman... View Obituary & Service Information

The family of James "Jim" Crosby created this Life Tributes page to make it easy to share your memories.

Send flowers to the Crosby family.