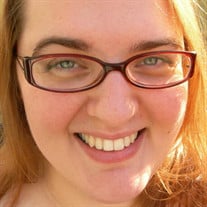 Jennifer “Jenny” Lynn Colvin, 43, of Greenville, South Carolina passed away unexpectedly on May 12th, 2022. Jenny was born in San Jose, California on July 1st, 1978 and raised in Hillsboro, Oregon. Jenny attended George Fox University in Newberg, OR where she received her degree in piano performance and also met the love of her life, Nathaniel Colvin. Jenny graduated from George Fox University in May 2000 and she and Nathaniel married on June 24th, 2000. Jenny and Nathaniel moved to Indiana where she got a master’s degree in library science at IUPUI while working at the music library at DePauw University in Greencastle, Indiana. After graduating in 2006, Jenny took a job as music librarian at Furman University in Greenville, South Carolina. At Furman University, Jenny was deeply connected across campus, collaborating with many students and colleagues on a variety of initiatives. She was ultimately promoted to the Associate Director for Outreach and Access Services Librarian at full Professor rank. She taught reading and storytelling classes, two things she greatly enjoyed. She was a certified strengths coach and academic advisor as well. Jenny believed strongly in women’s rights and was a strong ally of the LGBTQIA+ community. She helped Furman build a more inclusive campus, and just finished serving as chair of the Furman University Diversity, Equity, and Inclusion subcommittee on education and training. At a national level, she chaired the American Library Association's "Over the Rainbow Booklist'' committee which promoted the improved quality and accessibility of LGBTQIA+ literature for adults. At the state level she was involved in both SC Library Association and Partnership Among South Carolina Academic Libraries (PASCAL) initiatives. Jenny enjoyed traveling and had been all over the world, but also enjoyed adventures closer to home to learn more about the people and places where she lived. Whether traveling or not, she was able to enjoy her other passions, which were food and, most significantly, reading. Jenny enjoyed trying all kinds of food and learning about the cultures it came from. She also enjoyed trying new bakeries and new recipes from cookbooks and had her own baking blog called jennybakes.com up until last year. Jenny loved books and the stories she could explore through them. She contributed 3,876 book reviews to the popular reading website Goodreads and had generated a loyal community there based on her thoughtful reviews and openness to others’ opinions. In 2014 Jenny started a podcast called Reading Envy where she and a co-host would talk about some of their favorite books they had just read. The tagline for the podcast was, “I’ll have what you’re reading” with the idea of giving others informative reviews of books they may want to read. Her podcast went on to have 246 episodes and a sizable listener base. Jenny leaves behind her husband Nathaniel of 21 years and four-year-old son Chance, as well as her mother Judy Guy, and sisters Julianna Guy and Abigail Chavoya.

The family of Jennifer "Jenny" Lynn Colvin created this Life Tributes page to make it easy to share your memories.

Send flowers to the Colvin family.