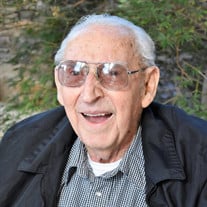 Jerden Hix Styles Jr., 92, husband of the late Carolyn Wylie “Toodle” Styles, went to be with the Lord on Friday, November 19, 2021, at Oakview Park in Greenville, SC. Born in Travelers Rest, SC, Jerden was the youngest of nine children born to the late Jerden Hicks Styles Sr. and Geta Burns Styles. He was a US Army Veteran of the Korean Conflict having served in the motor pool. Upon returning home from Korea, Jerden married Toodle on February 10, 1956. He worked at Renfrew Mill for twenty plus years and in the early 1970’s he left the mill after his brother Fred Styles suggested he build a garage at his Phillips 66 Gas Station between Travelers Rest and Marietta. He took his brothers advice and embarked on his passion of being around cars, repairing them and talking NASCAR, a true love for Jerden where he was proud to tell everyone he attended sixty-two races at Darlington Speedway. A lifetime friendship was soon developed between Ronald Batson and Jerden where they both started investing in buying and selling used cars and founded Styles Garage and Used Cars. He had many loves: NASCAR, Dirt Tracks, Fast Cars, cornbread, NC College Basketball (Tarheels & Blue Devils), coin collecting, family and friends. He was a member of the Woodmen of the World and a lifetime member of Enoree Baptist Church. Jerden is survived by his only child, daughter: Sandra S. Walker and her husband, David S. Walker of Stone Mountain, GA; grandson: Steven Angus Gainey, Jr. of Charlotte, NC and granddaughter: Lindsay Styles Gainey and her fiancée, David E. McKenzie both of Atlanta, GA along with many loving nieces, nephews, great-nieces, great-nephews and so many friends from his loving church, Sunday school class and customers of Styles Garage and Used Cars. Along with his parents and wife, Jerden was predeceased by five brothers and sisters-in-law: Young (Louise) Styles, Tench (Helen) Styles, Russell (Grace) Styles, Fred (Vivian) Styles and William (Gladys) Styles; three sisters and brothers-in-law: Azalee Styles Bowlin (Harold), Myrtle Styles Mayfield (Bill) and Ruth Styles Kilgore (Charles). A visitation will be held on Sunday, November 21, 2021, from 12:30 p.m. until 1:50 p.m. at The Howze Mortuary. Funeral service will follow the visitation in The Howze Mortuary Chapel at 2:00 p.m. Entombment will be private family only at Coleman Memorial Cemetery. The service will be live streamed beginning at 1:50 pm at www.facebook.com/thehowzemortuary

Jerden Hix Styles Jr., 92, husband of the late Carolyn Wylie &#8220;Toodle&#8221; Styles, went to be with the Lord on Friday, November 19, 2021, at Oakview Park in Greenville, SC. Born in Travelers Rest, SC, Jerden was the youngest of nine... View Obituary & Service Information

The family of Jerden Hix Styles Jr. created this Life Tributes page to make it easy to share your memories.

Send flowers to the Styles family.