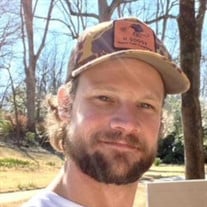 From July 12, 1981 to November 25, 2021, Jodah Anthony Mullinax touched the lives of those who knew him in ways that these words will only get close to explaining: Jodah was a graduate of Travelers Rest High School, Lander University and later was an officer of the South Carolina Department of Natural Resources. Somewhere within the chapters of his formal and informal educations he learned to do, fix or use just about anything he could get his hands on. His love and respect for the land took him from a tree-climbing boy to a mountain-summiting man. He’d compete with you in the short grass with a golf club, in a field with clays in the air or across a dinner table with a football made of paper. He could outlast the moon and be up waiting for the sun. Jodah planted, hunted, scavenged for fun, grew and canned food for his family and loved ones and made sauce that was hotter than is likely legal; his compass was true, in every sense; he loved his family, he searched for artifacts of history in the soil whenever he could, and he built a future home with his Forever, Caroline, using his hands, his heart and wood that God’s earth grew for him. A devoted Son, Jodah never let a day pass without checking in on his Mammy and Pappy. Jodah knew where he stood with his faith in God, and every friend he had knew where they stood with Jodah. He was there before you knew you needed him and if you were three hours away, he would be there in two. One of Jodah’s favorite quotes was by Harry Truman: “I never did give them Hell. I told them the truth and they thought it was Hell.” That sounds about right. But closer to the heart of this wonderful man was this quote of his own: “I’m good at love.” – Jodah Mullinax He was as tough as nails, kinder than words will ever do justice and he lived life in a way that we’ll do our best to emulate: when he didn’t quite know how, he rolled up his sleeves, got behind the wheel and showed us you could figure it out if you were just brave enough to try. Jodah is survived by anyone who ever knew how it felt when he smiled at you, including: his Mother and Father, Susan and Tony Mullinax; the love of his life Caroline Brackett; Beau 7, Fin 14, and Josie 12; Billie Ann Mullinax. Felicia Mullinax (Randy); Barry and Terre Mullinax; Linda Fair Kindrick, Mike and Judy Fair.

From July 12, 1981 to November 25, 2021, Jodah Anthony Mullinax touched the lives of those who knew him in ways that these words will only get close to explaining: Jodah was a graduate of Travelers Rest High School, Lander University and... View Obituary & Service Information

The family of Jodah Anthony Mullinax created this Life Tributes page to make it easy to share your memories.

Send flowers to the Mullinax family.