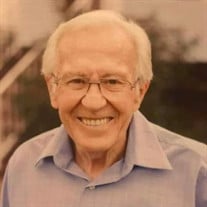 After faithfully serving Jesus, Johnny Stidham, 93 years old, had the privilege of meeting His Savior on Easter Sunday, April 17, 2022. He was preceded in death by his wife, Pat. They were devoted in marriage for 73 years where they raised and passed on an amazing legacy to their five daughters: Mrs. Connie (Hart) Cauthen, Mrs. Wanda (Robert) Clark, Roxanne Swann, Joyce Green, Mrs.Cathy (Gary) Wooten. At the time of his death, he was “Daddy,” “Grandpa,” or “Papa” to 83 family members. He loved each of them well. He rarely let anyone leave his home without something in hand. He was a skilled carpenter and many have been recipients of one of his unique wagons. He loved to cook and share his “secret recipe” homemade cookies or coffee cake. He was such a giver and many times in his life, he blessed others with an automobile. Born in Virginia and raised in Shelby, NC, he settled in Travelers Rest, SC after completing his time in the military. Early in his life, he worked in the textile mills and later became self-employed as a contractor. He then went to work for and retired from Dealer’s Supply Company. He transitioned to pastor North Greenville Christian Fellowship on a full-time basis for 15 more years before his full retirement. He was a man of strong integrity and character. His goal in life, which he successfully demonstrated, was to love people as Jesus did. As a pastor, he cared for his congregation from young to old. He built an exemplary children’s and youth ministry as well as serving as a pastor in a resident nursing home. He believed strongly in family and family ministry. He will forever be remembered for the love he shared and the joy he brought to those who knew him. In lieu of flowers memorials may be made to Agape Care 400 Pelham Rd. #100 Greenville, SC 29615.

After faithfully serving Jesus, Johnny Stidham, 93 years old, had the privilege of meeting His Savior on Easter Sunday, April 17, 2022. He was preceded in death by his wife, Pat. They were devoted in marriage for 73 years where they raised and... View Obituary & Service Information

The family of Johnny Stidham created this Life Tributes page to make it easy to share your memories.

Send flowers to the Stidham family.