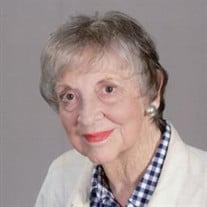 Margaret Sutton Blackwell, wife of the late Dill Blackwell, died Thursday, June 10, 2021. Born in Macon, Georgia, she was the daughter of the late Fred and Louise Sutton. Margaret was widely known for her work with vocal and choral music, having served as the Choir Director at Travelers Rest United Methodist Church for many years. She served on the Board of the Greenville Chorale for many years and was the Board’s President during the 50th Anniversary Celebration. Margaret’s musical career included vocal performances in Chatauqua, New York, Converse College, Brevard Music Center, the Greenville Symphony as featured soloist, and the Greenville Chorale as featured soloist, chorister, and conductor. For many years, she was soloist and section leader at Westminster Presbyterian Church as well as the Temple of Israel in Greenville. Margaret’s career also included her work as a Guidance Counselor with the Greenville County School District, from which she retired in 1989. Because of her work with various ethnic backgrounds, Margaret was appointed to the Greenville County Human Relations Commission, which she served on for three terms during Greenville County’s transition to fully-integrated schools. She also served on the Greenville Tech School of Nursing Board of Advisors. Margaret would say she is proudest of her accomplishments as a mother and grandmother. Her survivors include her daughter, The Honorable Judge Alice Blackwell (David), a son, Rick Blackwell (Ann), and four grandchildren, Maggie Blackwell, Alice Blackwell (Yates), John White, and Reece White (Kaity). Other survivors include Virginia Sutton, Ginny Margaret Ball (Randy), Beth Sutton, Rick Sutton (Dianna), Nancy Blackwell Agner (Terry), Elsie Blackwell Pollock, and Reece Blackwell (Gigi). The family will announce plans for a memorial service at a later date. Memorials in Margaret’s honor may be made to the Greenville Chorale, P.O. Box 16851, Greenville, SC, 29606, or the charity of one’s choice. Online condolences may be sent to the family at www.howzemortuary.com.

Margaret Sutton Blackwell, wife of the late Dill Blackwell, died Thursday, June 10, 2021. Born in Macon, Georgia, she was the daughter of the late Fred and Louise Sutton. Margaret was widely known for her work with vocal and choral music,... View Obituary & Service Information

The family of Margaret Sutton Blackwell created this Life Tributes page to make it easy to share your memories.

Send flowers to the Blackwell family.