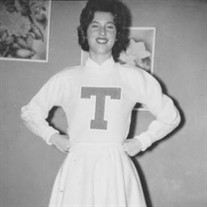 Margaret Stephens Martin of Travelers Rest, SC, passed away peacefully Thur. Nov. 18, 2021. Margaret was born in Valdosta, GA on June 28, 1941 and was raised in Atlanta, GA where she graduated from Brown High School. She then broke ground as being one of the first women to attend the Georgia Institute of Technology in 1959 and was the first woman ever to be admitted to the School of Psychology and to earn a Bachelor’s and Master’s degree in psychology. While an undergrad, Margaret was an enthusiastic football and basketball fan and was one of the first two women allowed to join the all-male cheerleading squad. While at Georgia Tech, Margaret received the Richard P. Moll award for outstanding scholarship in psychology and the Sigma Xi award for the outstanding Master’s thesis in science. She went on to earn a PhD in experimental psychology from Emory University in Atlanta. She then received a postdoctoral research fellowship in pharmacology from Harvard Medical School University in Boston in 1970. Margaret was a psychology instructor and served as head of the Human Services Department at Piedmont Technical College in Greenwood, SC from 1970 to 1986 where she won Teacher of Year in 1977. In 1986, Margaret joined the faculty at Lander University where was a professor of psychology. She also taught courses at Greenville Technical College in Greenville, SC and at the Medical University of South Carolina in Charleston, SC. She retired from teaching college in 2006 but continued teaching fitness classes at the Greenville YMCA until 2017. Aside from a busy and fulfilling career, Margaret was a loving mother, caring for four children as well as an impressive collection of rare orchids and African violets. She was a lifelong fan of Ga Tech football and basketball and was proud that she led the way for other women to attend. She loved traveling with her family, especially to Central and South America and enjoyed knitting, Zumba, gardening and gathering with her large extended family. Margaret also gave generously to the Ga Tech Alumni Association and to the World Wildlife Fund. Margaret is survived by her children Lisa Burk and her husband David of Baton Rouge, LA; Jason Martin of Greenville, SC; Stephanie Neal and her husband David of Raleigh, NC and Nicholas Martin of Greenville, SC. She was a proud grandmother of eight grandchildren. She is also survived by her sister Vicki McCourt of Encinitas, CA; her brother Richard Stephens and his wife Elaine of Travelers Rest, SC; her sister Andrea Mallory of Lawrenceville, GA; her sister Lee Layton and her husband Bruce of Cape Coral, FL; her brother Perry Stephens, Jr. and his wife Carol of Cape Coral, FL. Margaret is preceded in death by her parents Perry and Willie Mae Stephens of Lawrenceville, GA. A memorial service will be held Sat. Dec. 4, 2021 at the Howze Mortuary in Travelers Rest, SC at 11 am. In lieu of flowers, donations may be made in her name to the World Wildlife Fund at worldwildlife.org.

Margaret Stephens Martin of Travelers Rest, SC, passed away peacefully Thur. Nov. 18, 2021. Margaret was born in Valdosta, GA on June 28, 1941 and was raised in Atlanta, GA where she graduated from Brown High School. She then broke ground... View Obituary & Service Information

The family of Margaret Stephens Martin created this Life Tributes page to make it easy to share your memories.

Send flowers to the Martin family.