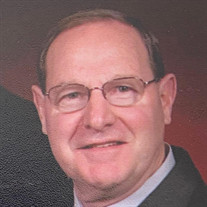 Paul Alan Seibert, age 73, passed away at his home in Taylors, SC on April 8, 2022. He had uncomplainingly suffered from virulent Atypical Parkinsonism (PSP) for many months. He is survived by his wife, Sherwood Taylor Robertson (Sherry); his brother James Kieffer Seibert (Anne), Williamsport, MD; his daughter, Dr. Gretchen Seibert (Tom Kozikowski), Frostburg, MD; his son, Paul Matthew Seibert (Kristen), Richmond, VA; his two stepsons, Dr. John Douglas Robertson(Cathryn), Montgomery, AL; Dr. Thomas Carter Robertson (Cynthia), Richmond, VA; and twelve grandchildren. Paul was preceded in death by his parents, Virginia Miles Seibert and Daniel Kieffer Seibert; his sisters, Cassandra Ruth Wilhide (Cassie) and Maryann Saloom (Rodney); his brothers Daniel Timothy Seibert (Dena) and John Jacob Seibert (Sally); and a stepson, Stephen Mott Robertson. When people met Paul he liked to tell them that he grew up on a dairy farm in Clear Spring, Maryland. There are many prize ribbons in his scrapbook for steers and heifers he personally raised and exhibited. The work he did at the farm was extremely hard and began when Paul was a boy. An avid birdwatcher, Paul could identify many birdcalls. He often talked about the ornithology class project he did under a professor from Sweet Briar College in Virginia. Paul documented the nesting season of a pair of chestnut-sided warblers on the Blue Ridge Parkway. He often said the fledglings sat on the edge of their nest and waited for him to come with his camera before they flew away for good. His South Carolina backyard is a designated Natural Wildlife Refuge. It has water, food and shelter for birds. He designed and built a flowing stream and a koi pond. Paul was a good athlete. Golf became Paul’s favorite sport in adulthood. Although he never practiced, he loved playing in captain’s choice tournaments. At Clear Spring High School he played tuba in the band and was a member of the basketball and soccer teams. Paul had a bachelor’s degree in Mathematics from Shepherd College in WV and an MS in Management Information Systems (MIS) at Texas A&M. He later earned an online PhD in MIS. For most of his working life Paul was the manager of the computer department at Babcock and Wilcox Nuclear Company (Framatome) in Lynchburg VA. He was a good manager and very protective of his employees. After he retired from B&W he began teaching computer science at the college level. His longest stint was at North Greenville University (NGU) where he worked from 2003 to 2019. He always gave his students every chance to improve their grades. For several years Paul and Sherry enrolled in many adult classes at OLLI (Furman) where Paul took painting, carving and many other classes. He also enjoyed attending the Broadway plays at the Peace Center plus the plays at NGU. Paul attended Mountain View UMC in Taylors. He served as President of the United Methodist Men and also sang bass in the choir. Nearly everybody who knew Paul liked him. He was pleasant, hard-working, non-judgmental, and agreeable. He could do so many things and would always help people if they asked. His death leaves a big hole in many lives. A visitation will be held on Monday, April 18th, from 6:00 to 8:00 pm at Thompson’s Funeral Home, Clear Spring, MD. Services will be held Tuesday April 19th at 11:00 AM at Saint Paul’s Reformed Church, 14234 National Pike, Clear Spring, MD. In lieu of flowers, donations may be made to Mountain View United Methodist Church, 6525 Mountain View Rd, Taylors, SC 29687, or to the South Carolina Land Trust Network, PO Box 12903, Columbia, SC 29211; or to the charity of your choice.

Paul Alan Seibert, age 73, passed away at his home in Taylors, SC on April 8, 2022. He had uncomplainingly suffered from virulent Atypical Parkinsonism (PSP) for many months. He is survived by his wife, Sherwood Taylor Robertson (Sherry); his... View Obituary & Service Information

The family of Paul Alan Seibert created this Life Tributes page to make it easy to share your memories.

Paul Alan Seibert, age 73, passed away at his home in Taylors,...

Send flowers to the Seibert family.