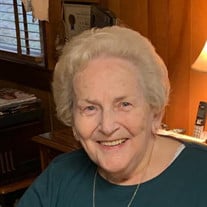 Peggy Lipscomb Park, wife of the late J.D. Park, Jr. (SCHP Retired), died February 21, 2022. She was the daughter of the late Edgar and Myrtle Ward Lipscomb. She was predeceased by her daughter, Cheryl (Cherry) Park Godfrey (Allen), her brother, Jimmy Lipscomb and her step-mother, Bethel Stewart Lipscomb. Peggy is survived by a son, John David Park, III, and his lovely wife, Brenda, who Peggy always called her other daughter. She is Grandma to four grandchildren: Ray Bishop (Jackie), Aaron Godfrey (her housemate for many years), Kara Park Garrison (Josh), Garrison B. Park (Mason) and four great-grandchildren: Lindsey Lark, Penelope Garrison, Parker Garrison, and Nora Park. Peggy graduated from Parker High School in the class of 1950. She often mentioned that those were some of the most memorable years of her life. She is also survived by her very dear friend, Joleen Littlejohn Graham, from the class of 1950. Peggy retired from Furman University in 2001 after 40 years of service to the University. She worked with five academic deans during that time and said she greatly respected each of them. Peggy also became a dear friend to many of the faculty and staff. She was a member of Parisview Baptist Church where she loved worshiping, and was active with the WMU and Seniors. Peggy felt her strong Christian roots came from her grandparents, Moment and Alice Ward with whom she lived after her mother’s death when she was 11 years old. Her mother’s sister, Marie Watson, became Peggy’s mother figure. They spent many hours traveling through the NC mountains and other places they both loved. The most important person, who brought great joy and love to Peggy’s life, was her husband J. D. Park, Jr. They were married when Peggy was only 20 and spent the next 60 years together. She claimed he was her “Rock,” and the love of her life! The family will receive family and friends from 10 AM until 11 AM Friday at the church prior to the service. Funeral Services for Peggy will be held at 11:00 AM Friday morning, February 25, 2022 at Parisview Baptist Church. The family will be at the home. Memorials may be made to Parisview Baptist Church.

Peggy Lipscomb Park, wife of the late J.D. Park, Jr. (SCHP Retired), died February 21, 2022. She was the daughter of the late Edgar and Myrtle Ward Lipscomb. She was predeceased by her daughter, Cheryl (Cherry) Park Godfrey (Allen), her brother,... View Obituary & Service Information

The family of Peggy Lipscomb Park created this Life Tributes page to make it easy to share your memories.

Send flowers to the Park family.