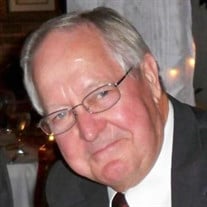 Richard Ephraim Heishman was born on September 25, 1941, in the West Virginia town of Wardensville, in the mountains he held dear his whole life. The fifth son of Thomas and Margie (Hilbert) Heishman, Richard’s trademark sense of humor surfaced early in life with his eight siblings, such as the story he would often laughingly recall of his eldest sister chasing him down the hill with a broom for some mischief or another. As a young man, Richard followed his older brothers to seek job opportunities in the greater-Washington, DC area where he worked at the Rosslyn Tire Store. One fateful day, he met and fell in love with his “sweetie” of now over 60 years, Cherie Daniels, when he started playing with her young daughter, Marcia as they waited for their clothes to finish at the local laundromat. Richard and Cherie were soon married and moved back to her home state of Iowa, where he quickly adopted Marcia and loved and raised her as his own daughter, something she will never forget. They lived in Iowa for over a decade as Richard pursued various successful entrepreneurial adventures in operating a gas station and selling livestock equipment. But having come to personal faith in Jesus as an adult, in the mid-1970’s Richard answered God’s call to preach, completing his GED and enrolling as a student, along with his daughter Marcia, at Bob Jones University. He graduated from BJU in 1981 and the same year, he and Cherie moved to Davenport, Iowa to start a church. He would go on to serve for 32 years as the much-loved pastor of Heritage Baptist, later renamed Northside Baptist (when it merged with Community Bible Church), before retiring to Greenville to be closer to family. In those three decades, he educated young hearts and minds at their Christian school, cared for the daily needs of his congregation, and led the church to purchase property and build a new building. But most dear to his heart and the passion of his life was to faithfully witness and preach the Bible, in order to win souls for Jesus. Marcia and her husband Mark Weaver also moved to Iowa in 1981, allowing Richard to live near what would eventually be his three grandchildren: Ellen, Jason, and Megan. Always a Pied Piper with children, Richard loved when his grandchildren would come to stay for several weeks over the summer, allowing him to share his love for hunting and fishing, finding a good bargain, and the simple pleasures of life like a good ice cream cone or “slurpie.” They will always remember his perpetual teasing, incessant nicknames, expert dickering for a deal, and avid outdoorsmanship with love. In recent years, he once again had the joy of teasing a small child, this time, his great grandson Jackson, whom he spoiled with more toy cars and trucks than could ever be counted. Richard loved many things in life: a fresh summer tomato; bow-hunting; fishing; collecting and reselling (anything!) for a profit at the flea market; Iowa Hawkeye sports; Civil War history (especially the battle of Cross Keys, which took place in his neck of the woods near West Virginia); traveling (his and Cherie’s trip to Israel was a special highlight); his extended Heishman family and reunions with them; his daughter’s family; and his dear wife Cherie, for whom he tirelessly cared for the last several years. But most of all he loved Jesus, His Savior, a legacy of faithfulness that he has passed to his family and all who knew him. He went home to heaven on September 10, 2021, just a few weeks shy of his 80th birthday. He now knows Jesus face-to-face and would want more than anything for you to know Him too. He was preceeded in death by his parents (Thomas and Margie Heishman) and five siblings (Bernell Smith, Ken Heishman, Joyce Osborn, Mark Heishman, and Wayne Heishman). He is survived by his wife (Cherie Heishman), his daughter and son-in-law (Marcia and Mark Weaver), three grandchildren (Ellen Weaver, Jason Weaver, and Megan Weaver), one great grandson (Jackson Weaver), three siblings (Tommy Heishman, Sam Heishman, and Karen Dove), and dozens of nieces and nephews. The family will receive visitors at Harmony Baptist Church (Long Forest Dr, Greenville, SC 29617) at 10:00 a.m. on Saturday, September 18. A service conducted by Richard’s nephew, the Reverend Brent Smith, will follow at 11:00 a.m. at the church. The service will be livestreamed at https://youtu.be/ew1eL8H-bgg In lieu of flowers, the family asks that memorials be made to Harmony Baptist Church or Miracle Hill Ministries.

Richard Ephraim Heishman was born on September 25, 1941, in the West Virginia town of Wardensville, in the mountains he held dear his whole life. The fifth son of Thomas and Margie (Hilbert) Heishman, Richard&#8217;s trademark sense of humor... View Obituary & Service Information

The family of Richard E. Heishman created this Life Tributes page to make it easy to share your memories.

Send flowers to the Heishman family.