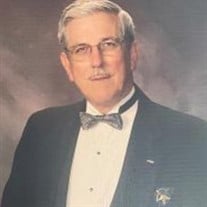 William Clyde “Bill” Burgess, husband of Elaine McAlister Burgess of the Tigerville Community, died July 6, 2021. Born in Greenville County, he was the son of the late William Wriley and Corinna Moize Burgess. Bill was educated in Parker District Schools and attended several schools while serving on active duty with the United States Army. He retired from the Army after more than twenty years active duty, having served two Tours in the Republic of Vietnam with the First Cavalry Division, and having attained the rank of Chief Warrant Officer. He received several awards during his active duty. A member of First Baptist Church, Travelers Rest, he had served as Deacon Chairman, Sunday School Teacher and Director, church clerk, and church treasurer. Bill was a life member and Past Master of Sam Poe Lodge #284, AFM, a life member of Cooper Lodge #282, AFM, a life member and Past Patron of Travelers Rest Chapter #205 and was currently a life member of Greer Chapter #151 and Past Grand Patron of the Grand Chapter of South Carolina, Order of the Eastern Star. He was also a member of The Hejaz Shrine. Other survivors include two daughters and son-in-law: Deby and David Day of Greenville, Leigh Evatt of Greenville; three grandchildren: Kellan Burgess, Ashton Moody, and Colby Evatt; one great-grandson; one sister, Betty B. Mull of Greenville; one brother and sister-in-law, Steve and Kathie Burgess of Greenville, and his mother-in-law, Gaynell McAlister of Travelers Rest. In addition to his parents, Bill was predeceased by a brother-in-law, Maurice Mull; father-in-law, Earl McAlister and sister-in-law, Wanda McAlister DuBard. The family will receive friends Saturday from 12:30 p.m. until 2:00 p.m. at First Baptist Church, Travelers Rest. Funeral service will be 2:00 p.m., Saturday at First Baptist Church, Travelers Rest, conducted by Rev. Claude McIntosh. Interment will be in Mountain View Memorial Park, with Military honors rendered by James F. Daniel Post 3, The American Legion. The family is at the McAlister residence. Memorials may be to one’s choice: The American Legion, James F. Daniel, Jr. Post No 3, P.O. Box 133 Greenville, S.C. 29602-0133 or to Hands of Kindness Children’s Ministry, P.O. Box 14064, Greenville, S.C. 29610 or to their web address: www.handsofkindnesschildren.com. Online condolences may be expressed to the family at www.thehowzemortuary.com. The Howze Mortuary in Travelers Rest is in charge of the arrangements. (864) 834-8051.

The family of William "Bill" Clyde Burgess created this Life Tributes page to make it easy to share your memories.

Send flowers to the Burgess family.